The Albany Municipal Airport was dedicated in 1931. In 1998, the airport became the first airport in Oregon to be named to the National Register of Historic Places, and was the City of Albany's fourth National Historic District. 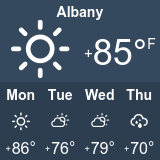 Ongoing projects by the City are seeking to preserve and extend the use of the historic hangars on the property.

In October 2019, this A-4 Skyhawk fighter jet was lifted into place at the entry of the Albany Municipal Airport.

Local pilots at the time funded the cost to bring the planes to Albany and volunteers worked to reassemble the parts into one plane.

The plane assembled into the monument was used in Vietnam, Desert Storm and National Guard units. It’s been hollowed out, but it still weighs 3 to 4 tons.

The paint job reflects both the Navy and the Marines and the “Capt. Dick Ebbert ‘Skippy’” emblazoned on the side is in honor of Ebbert’s work to get the plane to Albany. Ebbert died in May 2008.